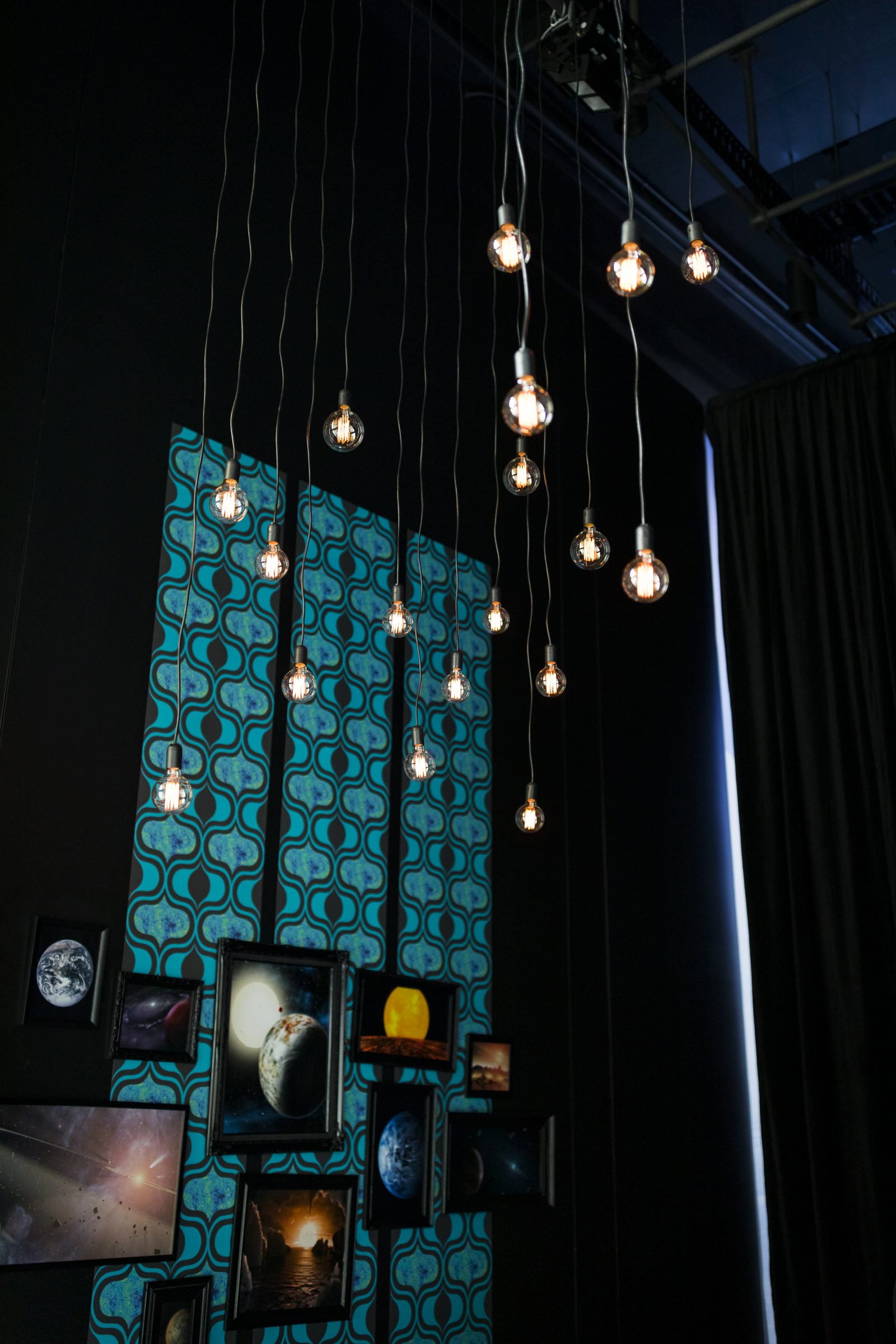 A few years ago, we started to think about the problems of communicating with sentient beings beyond our planet. Since the earliest days of the Space Age, scientists have tried to send messages to other beings using spacecraft and radio signals. They’ve used telescopes to look for possible signs of planetary engineering, and listened for patterns in the radio waves coming from the rest of the universe. All of this has come to nothing, despite decades of effort. We’re still as alone as we ever were.

We decided to approach the so-called ‘great silence’ from another angle. What if the issue were much simpler than everyone thought? What if no-one had ever made aliens feel welcome, or created a space where they could congregate and interact with other species? This was the genesis of the Cosmic Living Room.

On Earth, living rooms are communal spaces where families gather together and welcome guests to talk, watch, listen, or just be together. Most living rooms share some common features. These include comfy chairs and cushions, art works and family portraits, and soft carpets or rugs to enhance the feeling of comfort and relaxation.

Creating a space that would be welcoming for aliens to enter and interact with humans and one another presented some challenges. Not knowing what forms alien life might take, or what senses aliens may have at their disposal, we had to make some hypotheses about our prospective audience.

The Principle of Alien Competence

The more different the alien is from us, the more scientifically competent and technologically knowledgeable the alien will need to be in order to be here. Therefore scientific concepts can be used as message content in lieu of cultural commonalities. Technological prostheses – for example, converting visible wavelengths to their alien equivalent – can be assumed to compensate for biological differences.

The Principle of Situational Awareness

Any scientifically and technologically savvy alien will be motivated to observe our habitat, and will be capable of doing so. Therefore references to our world can be used as message content.

The Principle of Alien Self-Awareness

Aliens are aware of the fact that they are alien, and that we have no prior knowledge about them. This can be used as a basis for depicting and addressing them.

The Principle of Alien Leisure

Any civilisation that is capable of sending envoys to Earth will have sufficient command over resources to allow for leisure. Since leisure is likely to be a part of their culture, a living room is likely to be a familiar space that can provide common ground for congregation and interaction.

The Principle of Alien Engagement

Any aliens that have made the necessary effort to arrive on Earth will be motivated to make contact with their sentient counterparts. Their self-awareness will ensure that they attempt to use communications strategies that they believe will be accessible to us based on their situational awareness.

Corollary to the Principle of Alien Engagement

Different beings may have different standards of contact based on different biological, cognitive and experiential factors. Therefore, in order to be effective, the effort to connect must be mutual, and humans must exercise self-awareness to the greatest possible extent.

Based on these principles, we designed living room components to make the kind of space that aliens might be drawn to, and that might facilitate interaction with them. At the centre of the room is a circular rug which represents the concept of congregation. It shows many coloured orbital paths meeting at a common centre point which symbolises the aliens converging in a single place. This area is coloured blue, resembling the blueness of our sky, and stands in dramatic contrast to the surrounding blackness of space. A radial gradient from blackness to blueness guides visitors’ approach and signifies arrival. The rug is a higher dimensional material manifestation of the centre point, so that its conceptual circularity mirrors the actual spatial point marked by the rug.

The concept of interaction is communicated by the soundscape. The beats of the soundscape are generated by constructive interference between sine waves. The specific tone of each sine wave stands for an individual voice, and the multiplicity of tones indicates a plurality of voices. Rhythmic beats reveal interaction between these voices, embodying the emergent phenomenon of conversation.

Some of the tones are made to ascend and descend in frequency over time. The shifting tones emulate the Doppler effect to suggest the arrival and departure of beings entering and leaving an ongoing discussion, just as the blue shift of the carpet suggests arrival and departure in space. This reinforces the idea of contact as a voluntary act of indeterminate duration, and audibly echoes the multiplicity of orbital ellipses inscribed on the rug.

The soundscape includes tones that are not audible to people because their frequencies are above or below the threshold of human hearing. These tones may be apparent to alien beings. Indeed they may be normal for beings that are not sensitive to tones in our hearing range. Their inclusion extends the gamut of contact, and also reminds us not to assume that our perspective is universal or inevitable. What we cannot hear makes us more receptive.

Played on a loop, and audible through the sound system embedded in the living room chairs, the soundscape serves as a backdrop to conversation. It entices those who hear it to sound their own voices, interacting with one another. It is functionally similar to a song that leads listeners to sing.

The Cosmic Living Room is a space for beings throughout the universe to congregate and interact. The terms of congregation and interaction are open-ended. There is no predetermined structure or content. What matters is connection, which can serve as a means of overcoming xenophobia and building relationships.

MOD. is showcasing these artworks in a special event: Chamber Music for Aliens. Join us for an exclusive private concert, and then assist us to collect a dust sample from the carpet. This sample will be analysed by a scanning electron microscope to determine whether we have had alien visitors. Tickets and more info can be found here.