What do salmon, bees, parrots and sheep have in common? They all flock.

Play the role of a predator and see how the school of fish responds to you.

Shoaling behaviour is an example of self-organisation arising from local interactions between parts of an initially disordered system.

For example, a seemingly complex behaviour such as fish schooling can occur when each individual fish follows three simple rules:

While the term flocking is used to describe collective animal behaviour in general, other terms are used when referring to specific organisms:

Flocking behaviour was simulated on a computer in 1987 by Craig Reynolds with his simulation program, Boids. His program simulates simple agents (boids) that are allowed to move according to a set of basic rules.

The three basic rules that govern the complex behaviour of flocking animals are: 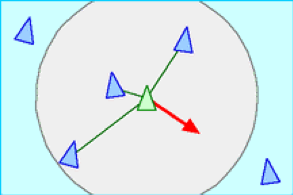 There are many benefits to shoaling behaviour: